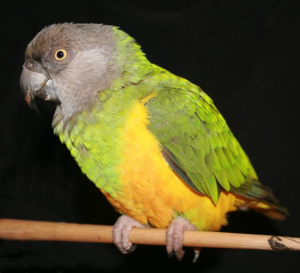 Senegal
The Senegal Parrot (Poicephalus senegalus) is a Poicephalus parrot which is a resident breeder across a wide range of west Africa. There are three subspecies. They do not differ in behaviour, but only in the colour of the “vest”. In the pet trade, the nominate subspecies is the most common though all three are raised and sold as pets.

Senegal Parrots are about 23 cm long, weigh about 125 to 170 gm. They have a relatively large head and beak for their overall size, and feathers form a short broad tail. Adults have a charcoal grey head, grey beak, yellow irises, green back and throat, and yellow underparts and rump. The yellow and green areas on a Senegal Parrot’s front form a V-shape resembling a yellow vest worn over green. Juveniles have dark grey, almost black, irises. Senegal Parrots are not sexually dimorphic.

Senegal Parrots live an average of approximately 25-30 years in the wild, and have been known to live for 50 years in captivity.

Hand reared Senegal Parrots are one of the most popular parrots to be kept as pets, and the most popular Poicephalus parrot. Their calls are generally high pitched whistles and squawks, but they are not as noisy as many other parrot species.

Red-Bellied Parrot
The Red-bellied Parrot (Poicephalus rufiventris) is an African parrot. It is a mostly greenish/grey bird with the green being more prominent over its lower surfaces and the grey more prominent over it upper surfaces. Adult birds have green feathers covering the upper portions of their legs, red irises and dark grey beaks. The species is sexually dimorphic; adult males have a bright orange lower chest and abdomen, whilst adult females are greenish over these lower areas. Red Bellied Parrots usually reach maturity at 12 months of age, when they will be about eight and a half inches in length.

Often considered to be the show-offs of the parrot world, the Red Bellied Parrot is often not as shy as other parrots, and some owners report that their birds will talk even more in the presence of company than they do when they are at home with people they know.

The Brown-Headed Parrot
(Poicephalus cryptoxanthus) is a mostly green African parrot with a greyish-brown head and yellow under its wings. The adult birds have yellow eyes and juvenile birds have brown eyes.
The Brown Headed is a green bird with a brownish grey head similar to a Senegal but does not have the colored belly. It has yellow under the wings at the front which unfortunately can only be seen properly when in flight. The iris is a greyish yellow, not a bright yellow as the Senegal. This species is also split into 3 sub species known as:

The differences between these sub species are very slight.
Hand reared birds make ideal pets and seem to be less liable to nip than the Senegal but obviously they are not as colorful. These birds tend to be a lot quieter than the other birds in the Poicephalus group. So if the slightest noise is a problem maybe this is the bird for you. 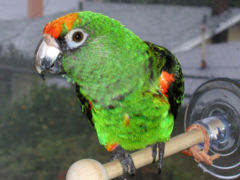 Jardines Parrot
Jardine’s Parrot (Poicephalus gulielmi) is also known as the Red-fronted Parrot. It is an African parrot. It is predominantly green with orange on the top of its head, top of its legs, and angle of its wings.
Jardine’s are the Amazons of the Africans, without the screaming and mating aggression. Plain and simple, they just love being alive. They live for life. They play constantly and hard, just for the sheer joy of doing it. They can entertain themselves for endless hours. They love being cuddled and scritched, hopping around, chasing things and swinging. Most seem to enjoy being on their backs, on the bottom of cage, in food cup, and on their perch while holding onto the cage with one foot.

They can be fairly good talkers – the voice quality can be almost as good as a Grey, but they usually don’t use the good voice, but a more birdlike one. They love you, just for the pleasure of it. Jardine’s are just happy-to-be-alive birds – no purpose, just here and enjoying it. They love just hanging out too.

There are three subspecies: 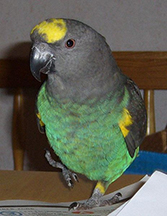 Meyer’s parrots are native to the plateau woodlands of sub-Saharan Africa. They are found in high densities in the Okavango Delta region of Botswana.

The average mature Meyer’s Parrot will measure eight inches (21 cm) and weigh between three and a half and four and a half ounces (100 – 135 grams). The wingspan of the mature Meyer’s Parrot will usually measure between five and a half and six inches (14.1 – 14.9 cm) in length. They are smaller in size than a Cockatiel.
They are relatively quiet and do not take up much space. These parrots are also sweet, fun-loving and can be taught to speak.

The Meyer’s parrot is reported to have a softer voice than many of the larger parrots, though they are still moderately noisy birds overall. In captivity they are reported to talk in some instances. There are never any guarantees your Meyer’s will speak, however, as is the case with all parrots, it is never recommended one be purchased with the expectation that it will speak. The Meyer’s Parrot is known to be more active when it does not think it is being watched. Like most parrots they love to chew, and wood is a favorite. The Meyer’s Parrot is quite popular among breeders and is second only to the widely kept Senegal Parrot. Its popularity will come as no surprise to those already familiar with the wonderful Meyer’s Parrot.