An Amazon parrot is a large parrot of the genus Amazona native to the New World ranging from South America to Mexico and the Caribbean.

Most Amazons are predominantly green, with accenting colors that depend on the species and can be quite vivid. Amazons, like all parrots, are zygodactyl, having four toes on each foot—two front and two back. They feed primarily on nuts and fruits, supplemented by leafy matter.

Amazons are known for their exceptional vocal abilities, playfulness, and dexterity with their feet. They are very loyal, loving companions; having them is somewhat like having a two-year-old human child in ability and temperament for 50-plus years. Amazons require a lot of attention when kept as pets. All parrots need a lot of stimulating activities to keep from being bored and terribly destructive to themselves and their surroundings. In particular, since Amazons are cavity nesters in the wild, their desire to chew wood is strong, and they need to be provided with destructible toys to satisfy this innate urge. 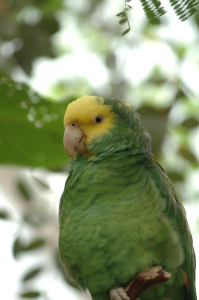 Double Yellow Headed Amazon
The Yellow-headed Amazon (Amazona oratrix), also known as the Double Yellow-headed Amazon is an amazon parrot of tropical America. It is a popular pet and an excellent talker. The Yellow-headed Amazon averages 15–17 in long. This species lives in riparian forest and areas with scattered trees, as well as evergreen forest in Belize and mangroves in Guatemala. It occurs in ones and twos, in small groups, and occasionally in big flocks. Their personalities make them highly desirable pets; they have been kept as such for centuries because they are among the parrots that “talk” best. Their vocal abilities are generally considered to be bested only by the African Grey Parrot and matched by similar species such as the Yellow-nape Parrot. They are also considered loud, active, intelligent, funny, and willful. They like to test their owners and to attract the attention of visitors.
Mealy Amazon
The Mealy Amazon or Mealy Parrot (Amazona farinosa) is one of the largest Amazon parrot species. The Mealy Parrot occurs in tropical Central America and South America. It frequents humid to semi-humid forest. It has a total length 14.96-15.75 in and weighs 540-700 g. It is among the largest parrots in the Americas, mainly being surpassed by a the large macaws. The Mealy Parrot is social and can be found in pairs or in large flocks. They are even known to interact with other parrots, such as macaws. They are usually quiet but can be loud at dusk and dawn. In captivity, they are know as one of the gentlest and calmest of all amazons. The diet of the Mealy Parrot consists mostly of fruits, seeds, berries, nuts, blossoms, and leaf buds. 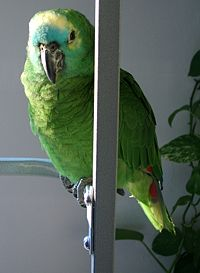 Blue Fronted Amazon
The Blue-fronted Amazon (Amazona aestiva), also called the Turquoise-fronted Amazon and Blue-fronted Parrot, is a species of a parrot and one of the most common parrots kept in captivity as a pet. Its name derives from the distinctive blue marking over its beak. The range of the Blue-fronted Amazon extends over Bolivia, Brazil, Paraguay and northern Argentina. Their talking ability is ranked third among birds when compared to African Grey Parrots or Yellow-naped Parrots. These birds are not only excellent talkers but are proficient singers as well. These birds normally are not shy and will perform for strangers. Although these birds tend to be very interactive, they also tend to play with toys contently for several hours at a time. It is important to give your blue front plenty of toys, perches, and climbing room. 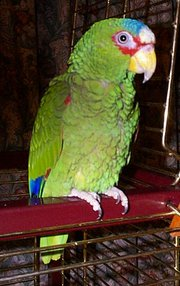 White Fronted Amazon
The White-fronted Amazon, Amazona albifrons also known as White-fronted Parrot is a Central American species of parrot. The White-fronted Amazon is native to Central America and southern Mexico; and is most often seen in small flocks of up to 20 birds. They are seen in a variety of different habitats from wet regions such as rainforests, to drier areas such as cactus savannahs. In the wild, they are not shy and people are often able to approach them. Flocks may congregate and people have seen groups that number into the hundreds. The White-fronted Amazon is relatively small when compared to other Amazons. At maturity this species will grow to a typical length of only nine to ten inches. This species is named for the bright white patch of feathers which is seen on their foreheads, although the amount of white varies from individual to individual. They have green plumage throughout, red coloring around their eyes (in some individuals almost like a mask) and blue coloring on their outspread wings and behind the patch of white on their foreheads. Unlike other amazon species, males and females can be distinguished by appearance (sexual dimorphism): males have bright red feathers on their shoulders (alula), while females have green shoulders. Like other large parrots, the White-fronted Parrot has a long life span, usually around 50 years. 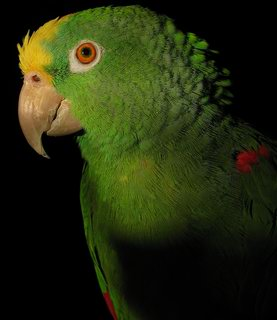 Yellow Crowned Amazon
The Yellow-crowned Amazon or Yellow-crowned Parrot (Amazona ochrocephala), is a species of parrot, native to the Americas with subspecies occurring from Mexico south to Peru and Brazil. There are feral populations of the subspecies oratrix in southern California, Florida and Puerto Rico. It is also known as the Yellow-headed Amazon, Yellow-headed Parrot, Yellow-naped Amazon, Yellow-naped Parrot or Panama Amazon.

They are normally found in pairs, rather than flocks. Their food includes fruits, nuts, and seeds and berries.

Red Lored Amazon
The Red-lored Amazon or Red-lored Parrot (Amazona autumnalis), also known as “loro cariamarillo” in Spanish, is a species of parrot, native to tropical regions of the Americas, from eastern Mexico south to Ecuador, with a disjunct population in central Brazil, where it occurs in humid evergreen to semi-deciduous forests up to 1100 m altitude.
It is 32-35 cm long, with a weight of 310-480 g. The plumage is primarily green, with red forehead, yellow cheeks (sometimes with red spots). The crown is blue and thick. Adult males and females do not differ in plumage; young chicks have less yellow on cheeks and less red on forehead.

There are four subspecies:

Their appearance is generally green with the most notable features being dark blue streaks behind the eyes, a bright red forehead and crown with light green cheeks.

This parrot is often kept as a pet and can be very affectionate and playful when given the attention they need from their owners. They should be given toys to play with if left alone. Although some are excellent talkers, they are best at mimicking sounds. 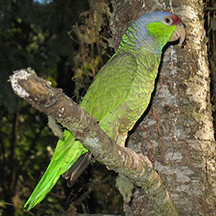 The birds are quite friendly in captivity and pick up quite a vocabulary even though they are not known as talkers. They are on the small side, and average of about 13″. They make wonderful companions and are quite the clown. They like water and need frequent showers, about 1 a week. If they are not showered, they will do it for themselves in their water bowl, which can make quite a mess. They are active and love to climb.

They also show remarkable intelligence, and will act out if ignored. Large parrots like this are not suited to complete novices, and would best be accommodated by owners who understand that such animals are a life-long commitment, requiring attention not unlike a human child.

Yellow-Shouldered Amazon
The Yellow-shouldered Amazon, Amazona barbadensis also known as Yellow-shouldered Parrot is a parrot of the genus Amazona that is a resident breeder in the arid areas of northern Venezuela, the Venezuelan islands of Margarita and La Blanquilla, and the island of Bonaire (Netherlands Antilles). It has become extinct on Aruba and possibly also on Curaçao (Netherlands Antilles).

The Yellow-shouldered Amazon nests in a tree hole and lays 3-4 eggs. It is highly gregarious when not breeding, forming flocks of up to 100 birds.

It is green, about 33 cm long, with yellow patches on the head and shoulders, and a red patch on the wing. The yellow shoulder patch and extensive yellow on the head distinguish it from other Amazona species which have red on the shoulder and restricted yellow on the head.
The call of this species is a rolling cur’r’r’k. There are probably around a thousand Yellow-shouldered Amazon in the wild. They feed on fruits, seeds, and cactus flowers.

Orange Winged Amazon
The Orange-winged Amazon (Amazona amazonica), also known locally as Orange-winged Parrot, is a large Amazon parrot. It is a resident breeding bird in tropical South America, from Colombia, Trinidad and Tobago south to Peru and central Brazil.

The Orange-winged Amazon is about 33 cm long and weighs 340 g. It is mainly green with a lateral blue stripe on the forehead, some yellow on the crown, cheeks and outer tail tips, and an orange speculum. Sexes are alike. A. a. tobagensis, found only on Trinidad and Tobago, is a subspecies which is larger then the nominate form, and has more orange in the wing. Orange-winged Amazons are noisy birds and make loud, high-pitched screams. They eat fruit and seeds, including the fruit of palm trees and sometimes cocoa.

It is found along the Pacific coast from southern Mexico south to northern Costa Rica. It is distinguished by its green forehead and crown and a yellow band across the lower nape and hindneck. The bill is dark grey and is paler towards the base of the upper mandible.

In common with many parrot species, it feeds on nuts, berries, seeds, and fruit. This parrot is easily taught to talk and is therefore popular as a pet. A rare blue mutation of the Yellow-naped Amazon is known to exist, in which the entire body is turquoise in color.