In the wild, caiques generally prefer forested areas and subsist on fruit and seeds. Caiques are generally canopy dwellers, spending most of their time in the tops of trees, foraging and playing.

Caiques are growing in popularity in aviculture, the more commonly found species being the black-head. Caiques bond well with humans and have a reputation as playful birds, and enjoy playing with toys while lying on their backs. They are not particularly good flyers, becoming tired and winded after only a short distance. They also tend to be clumsy and slow in the air as compared to other birds. They often prefer to walk, jump, climb, or hop as a mode of transportation. They are excellent climbers, with very strong feet and legs. They have also been historically known as “The Dancing Parrot” for their habit of hopping and dancing, especially when encouraged by rhythmic clapping.

Caiques can be quiet (compared with the maximum volume of larger parrots) if trained properly. They have a peculiar call which has been compared to a smoke alarm, used for warning and for making contact with flock members who are out of visual range. This call is high, piercing, and loud enough to alert flock members across the jungle or neighboring apartment dwellers. They are extremely active, prefer lots of physical interaction and playtime, and are prolific chewers. They can be distrustful of or aggressive toward other species of parrot, so prospective buyers should be careful if they have or plan to have other types of parrots. They can also be highly demanding of human attention, and stubborn, not easily distracted from stealing eyeglasses or chewing unapproved items even when tempted with favorite treats and toys.

Caiques are poor imitators of human speech, and their appeal as a pet lies in their playfulness, not their speaking ability. Some individuals can learn to mimic words, and will speak in a soft and gravelly voice. Many caiques easily learn to whistle and some birds enjoy developing a large repertoire which they creatively recombine to come up with new calls and short tunes. They also enjoy learning environmental sounds such as telephone rings and microwave beeps.

Caiques have a particular odor. The smell of a particular individual depends on genetics, emotional state, and diet. Some birds smell more strongly than others, and the scent can be described as a dry, cardboard-like smell. Happy caiques on a healthy diet often smell slightly sweet. Prospective buyers should interact with a bird before buying it (as all pet buyers should) to see whether they find the smell unpleasant.

As with most parrots, males and females of either species of caique look exactly the same. The only ways to determine sex are surgical sexing and DNA sexing. DNA sexing is safer for the bird than surgical sexing. 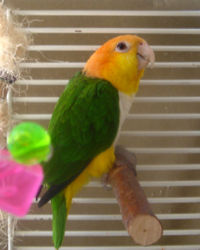 White-Bellied Caique
White-bellied Caiques are found south of the Amazon from northern Brazil to Bolivia, Peru, and Ecuador.

The White-bellied Caique, Pionites leucogaster, has an orange-yellow head, a white belly, green wings and back, bluish primary feathers, a horn-colored beak, and pink or grey feet. There are several subtypes of the White-bellied Caique, including the Green Thighed (Pionites leucogaster leucogaster), the Yellow Thighed (P. l. xanthomeria), and the Yellow Tailed (P. l. xanthrus). Currently, the Yellow Thighed is the type most commonly kept as a pet in the United States. The Green Thighed is somewhat rare in captivity, and the Yellow Tailed has been documented in the wild but is very rare in captivity.

Juvenile White-Bellied Caique
Juvenile white bellies often have brownish or black feathers on the head and back of the neck, as well as yellow feathers on the white belly, as shown in the photo on the left. Generally these off-colored feathers will be lost and replaced by orange or white feathers respectively. Young birds will also have dark brown irises, which will change to a rust or orange color as the bird matures. 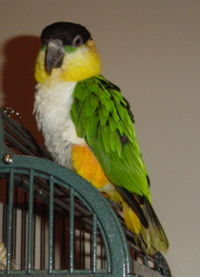 Black Headed Caique
The Black-headed Caique, Pionites melanocephala, is also known as the Black-capped Parrot or Pallid Caique. It has a black crown, yellow to orange head, white belly, yellow leg feathers and underside of tail, green back and wings, bluish primaries, greyish bill, and black feet. It is found in northern South America north of the Amazon in Peru, Colombia, Venezuela, Brazil, Guyana, and possibly French Guiana. There are two subspecies, with birds between them intermediate in color: