The Cockatiel (Nymphicus hollandicus), also known as the Quarrion and the Weero, is a diminutive Cockatoo endemic to Australia and prized as a household pet.
The only members of their genus, Cockatiels are now biologically classified as the smallest of the Cockatoo Family. These sweet-tempered birds are valued throughout the world as pets due to their gentle and sociable nature. These birds are found across the outback regions of inland Australia, and favour the Australian wetlands, scrublands, and bush lands.
The Cockatiel’s lifespan in captivity is generally given as 15-20 years, though it is sometimes given as short as 12-15 years and there are reports of Cockatiels living as long as 30 years.

The Cockatiel’s distinctive pointed crest is held erect when startled or excited, while a crest slightly tilted indicates a relaxed state of mind. The Wild type (natural coloured) Cockatiel’s plumage is generally mid-grey, lighter underneath, with an almost perfectly round orange patch on both ear coverts (usually referred to as the “cheek patches”) and a prominent white flash on the outer edge of each wings.

Cockatiels can form strong bonds with their owners. Otherwise quiet birds will frequently make contact calls with their owners, calls that sometimes can be quite loud if the person is out of sight. The cockatiel can grow so attached to its owner that it may try to ‘protect’ the owner from anyone that tries to come near it by biting or hissing. Their popularity as pets is in part because of their calm and timid temperament.

Although cockatiels are part of the parrot order, they are better at imitating whistles than speech. Some do learn to repeat phrases, and the males are generally better at mimicry than the females. Cockatiel speech, often comes out as a “whistle”, when they do annunciate, the voice is very soft and hard to make out. Cockatiels can mimic many sounds, for example the bleep of a car alarm, a ringing telephone, or the calls of other bird species such as blue jays or chickadees and loud weather like thunder. They can also mimic other pets such as dogs, occasionally barking back.

One issue with some cockatiels is night frights. This is when they are startled in the dark at night and they thrash about the cage, sometimes injuring themselves seriously. Some people suggest a nightlight near the cage so the bird can get its bearings, thus reducing the panic that leads to more thrashing.

There are many different color mutations of cockatiels. 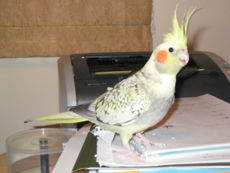 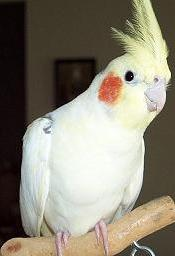 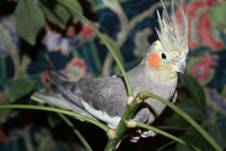