Conures are a diverse, loosely-defined group of small to medium-sized parrots. Scientists tend to refer to these birds as “parrots” or “parakeets”, while others in the pet trade call tem Conures. They belong to several genera within a long-tailed group of the New World Parrot subfamily Arinae. All living conure species are found in Central and South America.

Despite being large for parakeets, conures are lightly built with long tails and small (but strong) beaks. Conure beaks always have a small cere and are usually horn-colored or black.

They are known as clowns of the parrot species because of their antics and the way they behave.

They have a harsh screech, though for some conures this may temper with time or as they become comfortable in their surroundings. Conures can be loud birds. Their screeching can be ear piercing. Their delightful personalities make up for any annoyances caused by the screeching.

Conures need a great deal of exercise, and all conures are chewers. They must have distractions to keep them from becoming bored and lonely. Gnawing and climbing are great activities for this. They will generally chew up anything wooden! Natural perches and fresh twigs from willow, elder, poplar, and hawthorn work well. Other great toys include bells, ropes, swings, untreated leather, chew toys and ladders. They love mirrors and shiny unbreakable objects. Exercise and play are important activities for the physical well being and psychological health of your conure, but remember, they also need 10 – 12 hours of rest per day.

Conures can be good “talkers”. Their “voices” certainly aren’t as clear as some of the larger parrots but their owners can understand what they are saying. Please note that not all parrots talk and that includes conures – some do and some don’t. Of course it helps to talk to them often and clearly but there is no guarantee your bird will talk. Be prepared to love them just for the adorable creatures that they are. 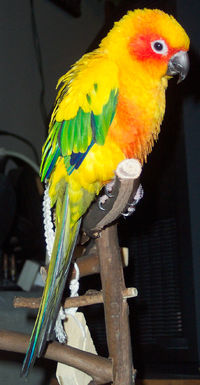 Sun Conure
The Sun Conure or Sun Parakeet (Aratinga solstitialis) is a medium-sized parrot native to the northeastern coastal forests of South America.

On average, Sun Conures weigh approximately 110 g, and are approximately 305 mm long from head to tail. They are sexually monomorphic.

Young Sun Conures display predominantly green plumage – the distinctive yellow, orange and reddish colouration on the back, abdomen and head being attained with maturity.

Sun Conures reach sexual maturity at around 2 years of age, and can live for 25 to 30 years. The Sun Conure is noted for its loud squawking compared to its relatively small size. It is capable of mimicking humans, but not as well as some larger parrots.

Sun Conures are especially popular as pets because of their bright coloration, and ability to talk. Due to their inquisitive temperaments, they demand a great deal of attention from their owners, and can sometimes be loud. Like many parrots, they are high-grade chewers and require toys and treats to chew on. They can be very friendly towards members of their “family” (their owners and close relatives), but may show aggressiveness towards strangers and attempt to attack them. They are considered the “teddy bear” of birds, and will attempt to protect their owner. 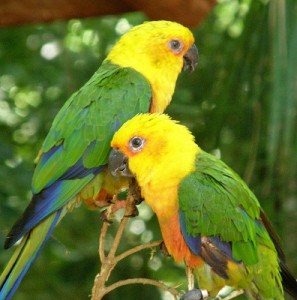 Jendays are around 12 inches in length and weigh around 120 grams. They have a reputation of being nippy and noisy, but they also cuddly and very affectionate. Like other conures, they are capable of speech.

They are loved for their wonderful personalities and beautiful coloring. Jenday Conures look very similar to Sun Conures, except that the wings of the Jenday are almost all green wings, other than the primary flight feathers, which are blue.

Green Cheeked Conure
The Green-cheeked Parakeet (Pyrrhura molinae), in aviculture also known as the Green-cheeked Conure, is a small parrot of the genus Pyrrhura. It is primarily green, with a grey breast, dark head, maroon tail and blue flight feathers. Its normal weight is about 70 g; its average length (including tail) is 25 cm (10 inches).

It occurs in west-central and southern Mato Grosso, Brazil, through northern and eastern Bolivia to northwestern Argentina. Its habitat is forests and woodland, where it forms big flocks at treetop level. It eats various seeds and fruits and probably other kinds of vegetable matter.

Green-cheeked Parakeets are common in captivity. They are playful, affectionate and intelligent, known as having a “big personality in a small body”. They can learn to talk, albeit with a limited vocabulary and a gravelly voice. They like to be held (although some like it more than others) and can learn tricks such as lying on their backs and “kissing.” Along with other Pyrrhura conures, they are only moderately loud, therefore making acceptable pets for apartment dwellers. They can be prone to biting, particularly when young, but an owner can cure this behavior with patience and time. They love fruits, (especially bananas and raisins), and seeds such as sunflower, safflower and hemp seeds; all things found in their natural environments. Green-cheeked Parakeets also love table food; they are flock animals and love to eat with their family. They can eat potatoes, carrots, corn, well cooked meat, bread, pasta, plain popcorn, and even eggs. Greencheeks are very similar to the Maroon-bellied Parakeet (P. frontalis), and can live to 15–20 years.