Lorikeets and lories are small, brightly coloured, regal, highly arboreal parrots. They are usually classified as Loriinae, the most clearly distinct of the several rather uncertain subfamilies within the Psittacidae. Some authorities regard the differences between the Loriinae and the other parrots as sufficient to justify promoting the group to full family status, in which case, following the biological naming conventions, they become the Loriidae, and are placed alongside the remaining true parrots (Psittacidae) and the cockatoos (Cacatuidae) within the biological order Psittaciformes.

Lorikeets are quite healthy and robust birds that usually live for 7-9 years. To ensure a long lifespan and good health, good hygiene is paramount. This means keeping cages and surroundings clean and cleaning out food trays and removing uneaten food daily. Also vital for good health is protection from the elements.

Lorikeets eat nectar from about 5,000 species of flowers. To collect the nectar they use their specialized tongues. On the tip of their tongues they have many protrusions; a tuft of papillae (extremely fine hairs). They extend to effectively collect nectar and pollen. Lorikeets have tapered wings and pointed tails that allow them to fly easily and display great agility. They also have strong feet and legs. They spend more time hanging sideways and upside down from branches, than sitting up-right when feeding. They will even hang from the side of the cage to eat rather than sit on a perch. Some species will use their foot as a “hand” when feeding, similar to the larger parrots, while others have not exhibited this behavior. One partner of a pair may hold a grape with its foot while both feed from it.

Lories require a specialized diet of a nectar mix, fruit and vegetables. Lorikeets are very untidy eaters and spoil the cage and its surrounds with their large, wet droppings. These messy eating habits require a diligent owner who is willing to clean the cage every day to prevent bacterial and yeast infections. Lories will not do well on a diet to high in protein 15% should be the maximum. They are highly susceptible to gout and suffer kidney and liver problems as well. They should not be fed an Amazon type of diet, full of legumes and such, as this is too much protein. Lories have also been found to be susceptible to hemochromatosis (iron storage disease) and for that reason raisins or other high iron content fruits should be avoided.

The smaller lorikeet varieties can make better pets because of their soft bite, but well-trained rainbow or red-collared lorikeets are good talkers and a lot of fun. Lorikeets are extremely playful and love to listen to music and dance. They form strong bonds with their owner and make excellent pets for those willing to provide the specialized care required by the lorikeet. This includes providing wet mix or nectar as a food source and ensuring the cage is kept clean despite a very messy bird.

Rainbow Lorikeet
The Rainbow Lorikeet, Trichoglossus haematodus is a species of Australasian parrot found in Australia, eastern Indonesia, Papua New Guinea, New Caledonia, Solomon Islands and Vanuatu. In Australia, it is common along the eastern seaboard, from Queensland to South Australia and northwest Tasmania. Its habitat is rainforest, coastal bush and woodland areas.

Rainbow Lorikeets feed mainly on pollen and nectar, and possess a tongue adapted especially for their particular diet. The end of the tongue is equipped with a papillate appendage adapted to collecting nectar from flowers.

There are many subspecies of Rainbow Lorikeets:

One popular subspecies of Rainbow Lorikeet, The Swainson’s Lorikeet, T. h. moluccanus tends to be a one-man bird. Bonding to one person in the family or choosing one particular part of your home as his own is common occurrence. For this reason it is very important that you socialize your Swainson’s Lorikeet well. If hand-raised they are gentle loving pets that can even be handled by most strangers. They are highly intelligent creatures and for this reason many are able to learn several tricks, sometimes amazingly difficult ones. Because they are so intelligent the Swainson’s Lorikeet does require a stimulating environment with several toys. Many Lories enjoy small parrot toys such as wooden blocks or bells. They can be loud, although not as loud as some other parrot species and are generally considered quiet in comparison. While not good talkers many Swainson’s Lorikeet are good mimics.

As with any parrot, ownership of lorikeets must not be taken lightly. Captive lorikeets have a long lifespan, often in excess of 20 years. Their diet makes them particularly messy; they are well-known in aviculture for their messy, liquid droppings and energetic nature. 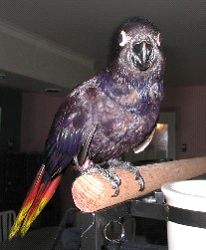 Black Lory
The Black Lory, Chalcopsitta atra also known as Rajah Lory or Red-quilled Lory is a medium-sized, up to 30cm long, blackish parrot with black bill, dark grey feet and long rounded tail. It has yellow and red undertail. Both sexes are similar. 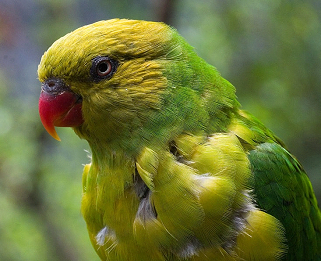 Perfect Lorikeet
The Perfect Lorikeet (Trichoglossus euteles) is found in Timor and surrounding islands, east Indonesia in Lesser Sundra islands.
Length. 10 in, Wing: 4.8- 5.2in, Tail: 3.5 – 4.2 in, Beak: 0.55-0.66 in, Weight: about 3oz
All green with lighter yellowish green under parts and olive-yellow head. They have an orange beak and the ring around the eye is narrow and grayish with the iris red. Their legs are gray-black. 10 inches (25 cm).

They are just as much fun as the bigger lories. All lories will make their presence known by jumping around, burrowing, swinging, climbing and making noise. They are very active; they will greet you first thing in the morning and last thing in the evening they will still be trying to get your attention.

Generally they are dark olive-brown with the latter being darker in colour. They have a distinct yellow on the forehead, cheeks, chin, bend of wing, thighs and under wing-coverts. There are dull yellow streaks to the nape. The rump is violet blue. The periophthalmic ring is black, as are the bare areas around the lores, cere and bill and also the bill itself.

The iris is orange-red and the feet are dark grey. They grow to around 31 cm.

It is found in the Tanimbar Islands and Babar, all in Indonesia. It was also introduced to the Kai Islands. It inhabits mangrove, coconut groves, plantations and forests.

A highly active, gregarious bird known to travel in flocks and to sleep in their nests year round. Very social and affectionate, lorie have been kept as pets with growing popularity, their song is usually softer than other parrots except when alarmed or bored.

Goldie’s lorikeet
The Goldie’s Lorikeet (Trichoglossus goldiei) is a species of parrot in the Psittacidae family. It is found in Indonesia and Papua New Guinea.

The Goldie’s Lorikeet is basically an all green bird with yellow streaking on the chest and belly. The head is bright red with bluish-purple coloring around the face. Its beak is black, and the skin around its eye and feet is light grey. The Goldie’s Lorikeet is a small bird, measuring 7 ½ inches (19cm) and weighing 45-60 grams.
They make excellent house pets due to their quiet nature. They are far less messy than the other Trichoglossus species and can be easily housed indoors with little to no problems. Some Goldie’s Lorikeets will learn to mimic human speech. They have a tiny, squeaky voice that, while very cute, can be difficult to understand.

Goldie’s Lorikeets are delightful little birds. They are quiet, non-destructive, and for the most part, non-aggressive. In most cases, the Goldie’s Lorikeet is a cautious bird, preferring to timidly creep its way around than boisterously charge ahead as do the other species of the genus Trichoglossus. Goldie’s Lorikeets can be housed as a single pair or grouped either in a single species flight or a mixed species community.