Parrotlets are a species of the smallest New World parrots, comprised of three genera. One of these genera: Forpus is growing in popularity within the world of aviculture, raising interest in the group as a whole.

Parrotlets are small, with a stocky build and a broad tail. At 4½–5 inches (11-12cm) long, they are the second smallest kind of parrot in the world. With a healthy diet, much exercise and healthy environment, the Parrotlet has a life expectancy of 30 years.

These feisty little birds should not be overlooked in favor of more widely known types of birds; any Parrotlet owner will tell you that these birds possess all the intelligence and attitude of the largest of macaws. These birds are fairly quiet companions, making them ideal for those who live in apartments or condominiums. Parrotlets are sexually dimorphic, meaning males can be distinguished from females. Males have markings of cobalt blue on their head, wings and tail. Females generally lack these blue markings.

They can learn more than 10–15 words and can “whistle” songs well. They have about the same speaking and whistling capabilities of a cockatiel. They are also very good learners for commands such as “step up”, “kiss-kiss”, “step down”, and other small commands. Many can be coaxed into ‘playing dead’ over time, and with much practice lie on their backs on command. Some parrotlets can learn advanced tricks. Having the ability to speak does not necessarily mean a bird will speak; it depends on the specific bird’s personality.

The Pacific Parrotlet (Forpus coelestis) the most common Parrotlet kept.

The Mexican, Green-Rumped, Spectacled, and Yellow-Faced are also fairly common pets. Their popularity as pets has grown due to their small size and large personalities.

Parrotlets are commonly known as playful birds that enjoy chewing as much as their larger Amazon Parrot counterparts. Being highly intelligent and active parrots, Parrolets must have ample opportunities to play and exercise. Environmental enrichment must be made a part of their lives as to prevent boredom. Parrotlets keep themselves more than occupied when left alone for several hours, so long as they are provided with an array of chewable and destructible toys to play with. However, when their keepers get home, they often greet them with lovely chirps and whistles to let them know they want attention. 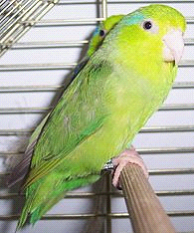 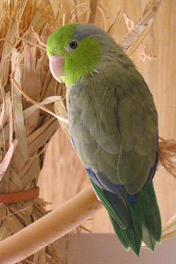 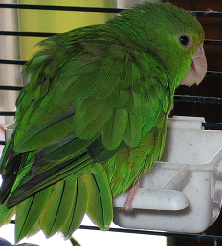 Green Rumped Parrotlet
The Green-rumped Parrotlet, Forpus passerinus, is a small parrot. It is a resident breeding bird in tropical South America, from Colombia and Trinidad south and east to the Guianas and Brazil. It has been introduced in Jamaica, Curaçao, Barbados and Tobago, and was not recorded on Trinidad prior to 1916.

The Green-rumped Parrotlet is about 12.7 cm long and weighs 23 g. It is mainly bright green with a short tail and pinkish bill. The male has a brilliant blue wing patch, and females sometimes have some yellow on the head. The subspecies F. p. viridissimus of Venezuela, Trinidad and Tobago is darker green than the nominate F. p. passerinus, and the males have more strongly blue-tinged wings.