Pionus is a genus of medium-sized parrots native to Central and South America. Characteristic of the genus are the chunky body, bare eye ring, (which can vary in color), and short tail. They are similar to Amazon parrots, only smaller. Coloration is generally subdued yet complex; under bright lighting, their feathers shimmer with iridescent brilliance. Many species share a bright red patch of feathers under the tail; the scientific name of one species, the blue-headed pionus, (P. menstruus), refers to this. Males and females are similar, with no notable sexual dimorphism.

Pionus parrots are regarded as excellent pets, although some species are very rare in captivity. There are eight species in this genus, of which five are readily available as domestic raised pets in the US. These five are the Blue headed pionus, Bronze wing pionus, Dusky pionus, White crowned pionus and Maximillian pionus. The remaining three are the Plum crowned, White head and Coral billed (or sordid) pionus. 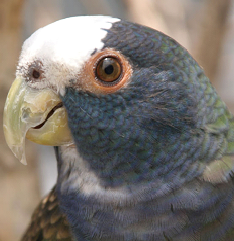 White Crowned Pionus
The White-crowned Parrot, Pionus senilis, is a small parrot which is a resident breeding species from eastern Mexico to western Panama. The White-crowned Parrot is 24 cm long and weighs 220 g. The adult male has a white forehead and crown, the feature which, likened to an old man’s white hair, gave rise to the specific name senilis. The throat is white, and the rest of the head, neck and breast are dull dark blue. The belly is light green, and the upperparts are dark green, with a yellow-olive shoulder patch. In flight, the blue underwings and red vent are conspicuous features.

Pionus parrots are known for their quiet (compared to other parrots) and reserved natures. Unlike some other companion parrots, they are not particularly playful, and do not enjoy playing or being flipped on their backs, but they do provide companionship and are described as gentle and charming pets.

When excited or frightened, birds of this genus emit a characteristic wheezing or snorting sound that is sometimes mistaken for a sign of distress, or a symptom of disease. They also give off a musky or sweet odor that some caretakers find unpleasant, but others enjoy.

The Maximilian Pionus does not have any special health concerns, other than a propensity to become overweight in captivity. This can be avoided, if they are kept stimulated with interesting toys and activities. They should also be fed a balanced, well rounded diet, and fatty seeds such as sunflower and safflower should only be fed as a treat. They should also be given plenty of fresh fruits and vegetables.

The female White-crowned Parrot is similar to the male, but the blue plumage fades into scaling on the lower breast and the shoulder patch is duller. Young birds have little blue on the head and neck or red on the undertail, and the crown feathers are green edged with white. 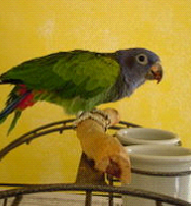 Blue Headed Pionus
The Blue-headed Parrot also known as The Blue-headed Pionus, Pionus menstruus, is a medium large parrot. It is a resident breeding bird in tropical Central and South America, from Costa Rica and Trinidad south to Bolivia and Brazil.

The Blue-headed Parrot is about 27 cm long and weighs 245 g. It is mainly green with a blue head, neck and upper breast, red undertail, and some yellow on the wing coverts. Sexes are alike, but immatures have less blue on the head, as well as red or pinkish feathers around the ceres. They molt into their adult plumage at about 8 months of age, but it can take up to two years for the full blue hood to emerge.

Blue-headed Parrots are noisy birds and make light, high-pitched squeaking sweenk calls. They eat fruit and seeds, and sometimes grain. They roost communally in palm and other trees, and large numbers can be seen at the roost sites at dawn and dusk.

Blue Headed Pionus Parrots are increasingly popular as pets. Compared to other parrot species (Amazons for example) they are very quiet. They are affectionate, but not known for their talking ability.

The Bronze-winged Parrot, Pionus chalcopterus, is a medium sized (29cm) short-tailed stocky parrot found in the NE Andes from Venezuela and Colombia through NW Peru. It is mainly dark with a whitish chin patch surrounded by a pink ring, and red undertail coverts. The green with a dull olive brown head, yellow and black bars on the mantle, back and rump, and red undertail coverts. The rump, tail and wings are dark blue with lighter blue underwings. The head is dark blue-green; the mantle, back and underparts are dark bronze-green with some blue tips and sometimes scattered red feathers.

There are two subspecies:

The Bronze-winged Pionus is a medium size stocky parrot with a wonderful personality. These birds grow to a length of 11″ (28 cm).

These birds tame very easily and are very sociable. They are not loud like many birds. They have very steady personalities and do not tend to bite.

The Dusky Parrot (Pionus fuscus) is a species of parrot in the Psittacidae family. It is found in Brazil, Colombia, French Guiana, Guyana, Suriname, and Venezuela.

Dusky Pionus are one of the smallest pionus species. They tie with the white-cap at 9 1/2 inches. Most of that size is body since they have short tails. The average life span for a pionus is 25 years. However, there are many that live longer, some as old as 40.

They are very good pets as they are generally good natured and less highly strung and demanding than some other birds. They are surprisingly obedient birds that will learn simple tricks.

Pionus are not known for their talking ability. With pionus, talking is highly variable between individuals. On average, they learn to say a few words (as in under 10), but don’t say them with much clarity. Because of the high variability however, there are some individuals who speak quite clearly and learn 20 words.

Pionus parrots in general are reported to be quiet when kept as pets. Baby birds make a distinctive begging sound which sounds like a very small sheep bleating. However, even though pionus are rated as quiet birds, they can learn to screech, and can be louder than some cockatiels.

The Maximilian’s Parrot also known as the Scaly-headed Parrot (Pionus maximiliani) is a species of parrot in the Psittacidae family. It is found in Argentina, Bolivia, Brazil, and Paraguay.

The Maximilian’s Pionus appears rather plain from a distance but like the Dusky Parrot, has a variety of subtle colors that are particularly beautiful when seen in full sunlight. It is also known as the Scaly-headed Parrot because of its head feathers having grey edges giving it a scaly appearance. These birds are a medium sized Pionus and grow to a length of 11 /2″ – 11 3/4″ (29 – 30 cm).

The Maximilian’s Pionus, though not the largest of the Pionus species, is a small to medium size stocky parrot with a wonderful personality.

The Maximilian Pionus is known for its good natured behavior and makes a good pet. They are not as high strung as some parrots, but they may also become overly sedate and this can lead to obesity, if they are not kept active. They are not aggressive and are known to do quite well in communal aviaries with other species. They should have plenty of toys and room to move about their cages. Unlike Amazon Parrots, the Maximilian Pionus is known for being quiet. They are, however, quite capable of being loud and this should be considered if looking for a suitable pet for an apartment. The Maximilian Pionus is an intelligent parrot, and like the Blue Headed Pionus, some have been reported to talk. They are not as good at talking as the African Grey, but many can develop a small vocabulary.