A rosella is one of 5-8 species of colorful Australian parrots in the genus Platycercus. Platycercus means “broad-” or “flat-tailed”, reflecting a feature common to the rosellas and other members of the broad-tailed parrot subfamily.

Rosellas are native to Australia and some nearby islands, where they inhabit forests, woodlands, farmlands, and suburban parks and gardens. They are confined to the coastal mountains and plains and are absent from the outback. Introduced populations have also established themselves in New Zealand and Norfolk Island.

Because of their strikingly colorful plumage, several species are widely kept as pets. 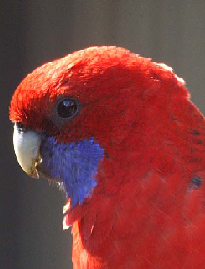 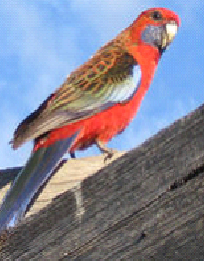 Crimson Rosella
The Crimson Rosella, Platycercus elegans, is a parrot native to eastern and south eastern Australia which has been introduced to New Zealand and Norfolk Island. It is commonly found in, but not restricted to, mountain forests and gardens. The species as it now stands has subsumed two former separate species, The Yellow Rosella and the Adelaide Rosella.

Eastern Rosella
The Eastern Rosella, Platycercus eximius, is a parrot native to southeast Australia and Tasmania. It has been introduced to New Zealand. The rosella pictured to the right is a male. The female rosellas have lighter colours than the males.

The bird is around 30 cm long, with a red head and upper breast and white cheeks. The rest of the breast is yellow becoming more greenish toward the abdomen. The feathers of the back and shoulders are black with yellowish margins, giving rise to a scalloped appearance. The wings and lateral tail feathers are bluish while the rest of the tail is dark green. The female is similar to the male though duller in coloration.

These birds are desired for their beautifully colored plumage. They are very intelligent creatures, which can be trained to whistle a wide repertoire of tunes and may even learn to speak a few words or phrases. Rosellas can make wonderful companions; however, they require a great deal of attention and many toys to satisfy their need for social interaction and mental stimulation. These birds do not always adapt to life as a family pet and even hand-raised birds may never become fully-domesticated. Generally, this species does not tolerate “petting” or “cuddling” and is apt to bite in response to this type of handling. Many people believe that Rosellas are best housed in large aviaries that enable them to fly freely with minimal human socialization. Despite these difficulties, many people enjoy the Eastern Rosella has a beautiful pet with a strong, feisty personality. 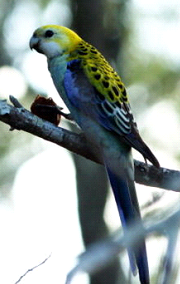